Money Deal is an application developed by the Foundation Act against the‘exclusion, which allows‘learn how to better manage your budget.

Money Deal is a serious game, or “serious game” in French, available via an application to download on smartphone or directly on the web. Developed by the Fondation Agir contre l’exclusion (FACE), it allows you to learn how to better manage your budget and aims to prevent over-indebtedness.

6% of French households in a situation of financial fragility

In France, according to a report by the Observatory of banking inclusion, 6% of households are in a situation of financial fragility, or 3 million people. For the persons concerned, this financial fragility results either in an entry in the Central Check File (FCC) of the Banque de France, due to an unpaid check or a withdrawal of a credit card by the bank, or in a over-indebtedness procedure.

In the current economic context, a job loss or a sudden drop in income is even more likely to unbalance household budgets. All socio-professional categories can find themselves in a situation of financial fragility, due to a large unforeseen expense, a drop in income or even unbalanced budget management.

The process leading to over-indebtedness is known and can be very rapid. In order to compensate for a drop in income, households take out a first consumer loan, then a second to repay the monthly payments of the first. Revolving credits or cash reserves are also used to try to cope, but since interest rates are very high, the remainder of life decreases from month to month and the situation can quickly become uncontrollable.

The only way out of this spiral is then to start an over-indebtedness procedure, which leads to a recovery plan and sometimes to a debt freeze.

Money Deal, an application developed by the Fondation Agir contre‘exclusion

To prevent households from finding themselves in a situation of financial fragility and over-indebtedness, the Fondation Agir contre l’exclusion (FACE) has developed the Money Deal application.

FACE is a recognized public utility foundation, which aims to fight against discrimination, exclusion and poverty. Originally, she worked mainly in the business world, but her missions have expanded and she is now also involved in the fields of consumption, health, housing, digital and even ‘education.

The Act Against Exclusion Foundation was created in 1993 on the initiative of 13 companies: Danone, Axa, Casino, Club Med, Darty, Havas Worldwide, Fimalac, La Lyonnaise des Eaux, Pechiney, Ratp, Renault, LCL and Sodexo. , joined in 2002 by Manpower and in 2007 by AG2R La Mondiale.

In addition, FACE works in collaboration with associations, institutions, researchers, and its network now includes more than 5,650 companies.

FACE developed the Money Deal application in collaboration with the Bouygues Telecom Foundation, Bouygues customer service is available for any questions, the social protection group Humanis and the AFNIC Foundation (French Association for Internet Naming in Cooperation), which works to train and raise public awareness of Internet use.

Why use the‘Money Deal app? 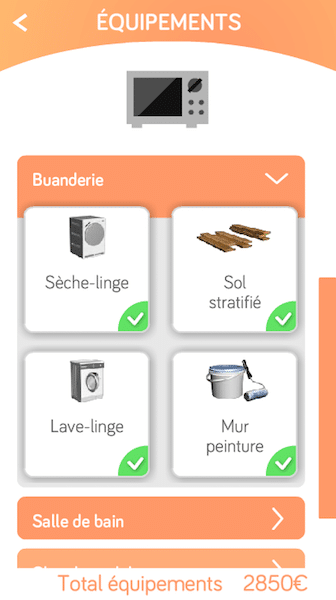 The Money Deal application aims to support families on a daily basis in managing their budget, in a fun way. The user first enters the criteria corresponding to him, such as his age and his family situation, but also the place where he does his shopping and the main mode of transport he uses. At the end of each month, he receives advice on how to improve certain points and reallocate certain expenses to other budget items.

Money Deal allows users to better visualize, at the end of each month, the expenses incurred in the various areas of daily life, such as transport, health, food or leisure. The serious game also allows you to learn how to react better in the event of unforeseen difficulty.

The application also provides links to associations or institutions that can help households in the event of financial difficulties.

Each part lasts 12 months, during which the user is required to choose the expenses to be incurred in order to pay his bills, equip or improve his accommodation or even manage the budget necessary for leisure activities.

The application is intended to be used as part of social support, during budget management workshops for example, as well as individually.

First of all, you have to configure the game by choosing one of the three scenarios offered: easy, medium or difficult. The different levels of difficulty correspond to different financial situations, from the most complicated to manage to the simplest.

In the easy scenario, the user’s avatar earns 1150 euros per month. He works full time, has savings of 1,500 euros, owns his home and repays the monthly installments of a mortgage.

In the medium difficulty scenario, the avatar earns 850 euros per month, works 24 hours a week and has no savings. He is a tenant and has taken out consumer credit.

In the difficult scenario, the financial situation is very complex: the avatar of the user is a beneficiary of the RSA, and receives only 545 euros per month. He has no credit but debts totaling 500 euros, is unemployed and rents his accommodation.

The user then refines the data by entering their sex, age and family situation: single, in a couple, with or without children. He is also asked to indicate whether he shops in hard discount supermarkets, in big box stores or in specialized stores. Finally, he informs his main means of transport (bicycle, car or public transport) and his place of life (countryside, city or peri-urban area).

It is then sufficient to validate these choices and information to start the game. 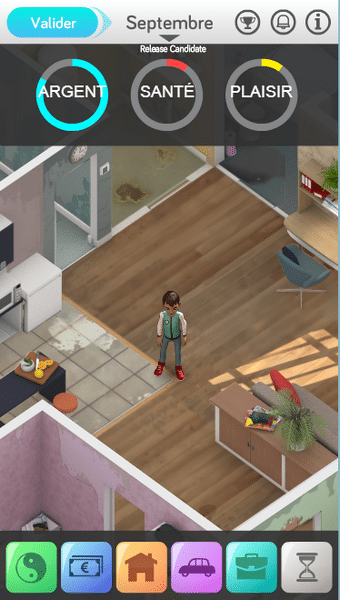 On the screen, a character, female or male, appears according to the information provided by the user. He lives in poor housing, which he will have to improve over time, depending on his income and other essential expenses. The character can move from one room to another and evolve in his dwelling.

Notifications indicate the missions to be carried out, ideally 2 or 3 per month. These are missions corresponding to the 5 areas covered by the game, materialized by 5 icons:

A 6th and last icon, the schedule, allows you to follow the time spent with family, at work or in leisure activities over the months.

Each month, the game gives the user different missions to accomplish in order to learn how to better control their budget. The missions consist, for example, of improving one’s health by increasing the corresponding gauge, renovating a room in the dwelling element by element, from floor to ceiling, saving a certain amount or paying the bills.

The avatar must also fully equip the rooms of his accommodation, little by little, according to his resources. In reality, these essential expenses can quickly weigh on the budget, between the purchase of the equipment itself and the transport of parcels in particular, but they are necessary to improve one’s daily life.

Notifications warn the user of the payment of allowances, warn him in the event of the approach of the overdraft threshold or if unexpected expenses arise, for example a vehicle breakdown, theft of a telephone or a health problem.

The Money Deal application presents the user with the current account of his avatar, displaying the resources in green, and the expenses in red, as well as the remainder to live for the following month.

It is possible to pay all or part of the bills, and to take out a consumer loan or a mortgage. Finally, it is of course strongly advised to put money aside, either by means of a one-off transfer from the current account to the savings account, or by setting up a permanent transfer.

For each budget item, advice is given to the user of the application. For example, he is advised to contact the Communal Center for Social Action (CCAS) in his town in the event of unpaid rent, to plan a shopping budget for the whole week and to stick to it, or to find out at the town hall about the Culture Passes that young people aged 18 can benefit from.

The serious game Money Deal is therefore a complete application, which fulfills its role of advice and support in an educational and fun way.

Other tools to manage your budget: